Review of the sony HVL-F32M flash

One weak point of my Sony nex-5 camera was the lack of stronger flash shoe. It had only a smart accessory terminal that could accommodate only 2 types of small flashes. The HVL-F7S is more or less equal to a built in flash, while the HVL-F20S is stronger, but still not up to all kind of lighting jobs. My biggest grippe was that none of both flashes can command an external wireless flash in TTL flash mode.  I managed to circumvent this by a Wansen radio controller using manual flashes. I even built a twin-adapter forthe HVL-F20S but the light output was not always enough after channelling it through the optical fibres. So I was happy to learn that new Sony mirrorless cameras have a redesigned hot shoe for accommodating bigger flash lights and left the Minolta system behind. The so-called “iISO” Minolta type of hot-shoe (or Auto-lock Accessory Shoe in the Sony era) was not a bad idea and attaching and detaching of flashes were really fast. However, after a while I experienced contact problems on both of my KM 7D and Sony A100 cameras.
My current camera is an A6000 and it has a small built-in flash. Unfortunately it cannot be used as a commander for external wireless flash, and it’s hard to understand why it was not properly implemented by Sony. Anyway, I needed a new flash for this camera and started to look around first among the third party suppliers. First I wanted to get only a small flash can control my old Minolta 5600 HSD as cheap as possible, so I went for a Travor SL-282S (around 40 euro from amazon). It’s clearly a copy of the HVL-F20M. I don’t have this flash but my HVL-F20S felt much sturdier. Unfortunately I had a bad luck with the Travor, after few tries it stopped working. I sent it back and didn’t try another copy. The next flash I've tried was a Meike MK320-S Mi Flash (72 euro on Amazon). First impressions were good but I couldn’t command my external flash with it. I still wanted to keep as a macro flash, because the size and guide number looked perfect. I even made a soft box specifically for the 30 mm macro lens, but the TTL didn’t work well. It always seriously overexposed the subject. I think de-coding of the Sony TTL protocol was not perfect and it can’t control very short flash burst. For normal scenes it worked OK, so as a standard flash it might be used, but due to these two flaws (macro, lack of wireless) it went back to Amazon. I even considered the widely praised Nissin i40 but finally I had enough experimenting with third party flashes and just bought the Sony HVL-F32M. Its price recently dropped (190 euro on Amazon while Nissin goes for 174 currently), so it’s quite affordable and the flash head is not so protruding (important for my DIY plans) compared to the Nissin that has slightly better specifications.
After the long, but I hope useful introduction, let’s have a closer look at the flash. It arrived in an elegant etui containing a foldable mounting foot (works as a mini stand) and a shoe protector. 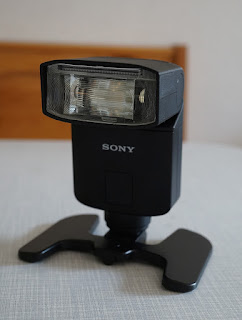 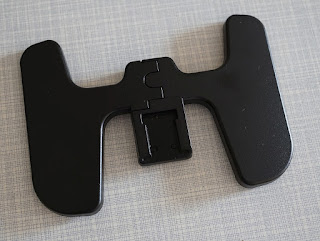 The size and weight is just perfect for the A6000. It’s approx. 235 g without batteries.
Mounting is easy and I actually like the lock mechanisms a lot, I hope it will be sturdy. Time will tell. 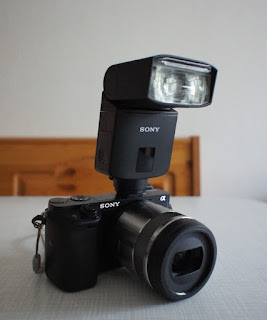 The guide number is 32, which is good for most of the jobs but it’s surely not a monster you would use in a studio for big soft boxes etc. The head swivels 90° left and 180° right and tilts vertically from -8° to 90°. It can be used creatively in various lighting set-up such as bouncing off ceilings with vertical camera or lighting the wall behind the camera. 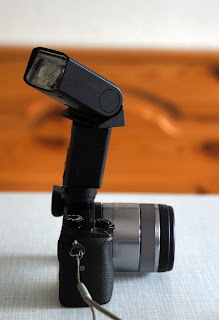 Tilting down is surely not enough for macro photography when the SEL30M35 lens is used. For this you will need some DIY flash adapter. I will create some fibre optics adapter soon but I made a ring-flash adapter quickly. Actually I used a polystryrene ring from a previous DIY project. The light is reflected with a mirror but the cardboard tube I’ve folded is also covered inside with a self-adhering reflecting tape. 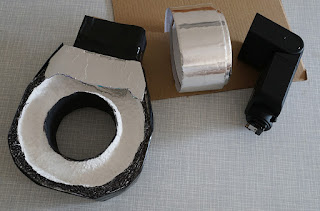 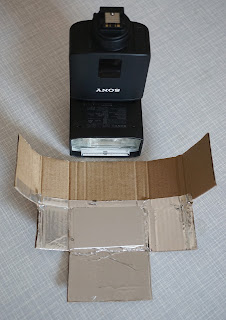 You can’t see well in this picture but the mirror is in a 45 degree position reflecting the light downwards. 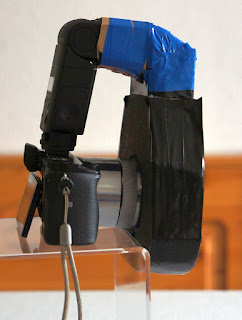 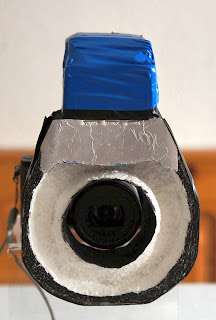 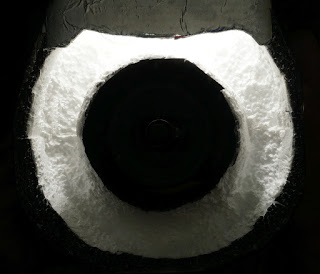 In this series of photos you can see the excellent work of TTL. The exposure is perfect on all of those different set-ups: 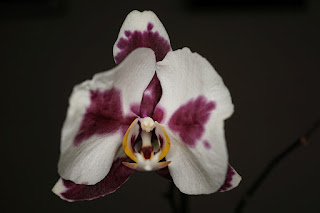 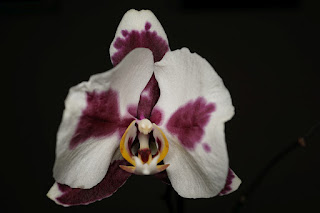 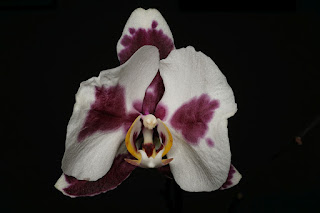 Some more from the forest: 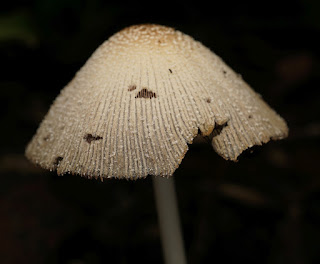 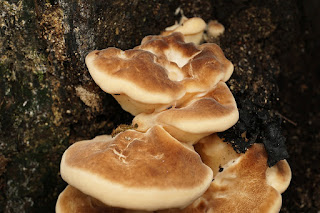 It can be used as a commander for wireless photography but only one channel is used. The flash mode should be set in the camera first (wireless) then on the flash which mode the flash is intended to be used (commander or remote). Manual functions are only available when the camera is also set to M mode. 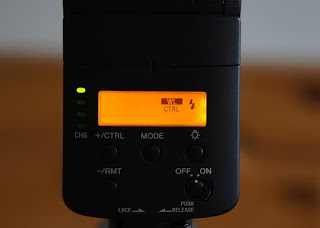 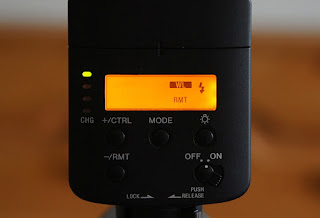 The wireless function works fine. It contributes a bit to the lighting, so you may use an IR pass filter (unexposed, developed slide film can be used as an IR filter, if you still have some in your cupboard).
The same orchid was photographed but the main light came behind from a Minolta 5600 HSD flash (with a small soft-box): 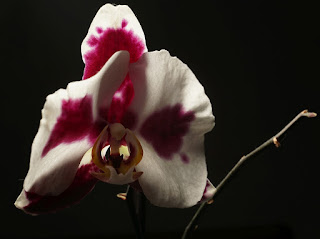 The best, when the external flash is combined with some specific light former, like this rim-light adapter below: 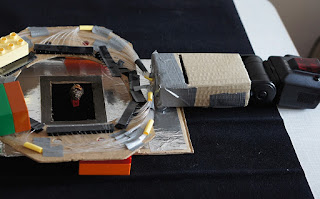 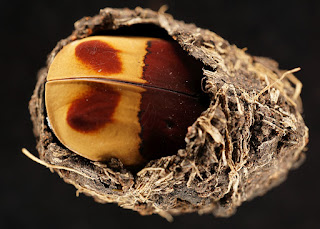 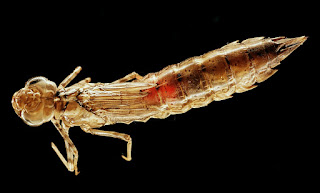 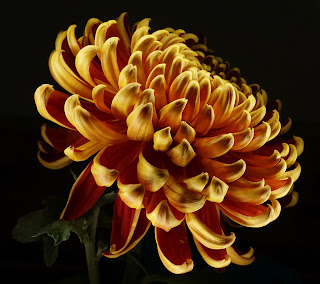 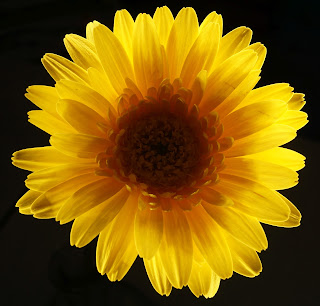 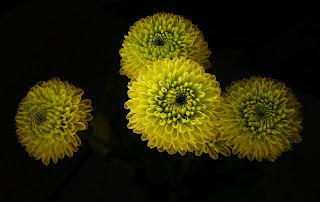 The flash is dust and moisture-resistant due to a special inside sealing, nevertheless I don’t recommend using flash in a rainy day, but special sealing to keep the dust and moisture out is welcomed. It can do ADI flash metering (considering distance information from appropriate lenses) and high-speed synchronization (HSS) so it can supports all shutter speeds and wireless operation. To test this I managed to convince my son to pose me for few photos. The first photo is a typical back-lit picture, and such situation happens quite frequently in a city trip, when the direction of the sun is just not optimal: 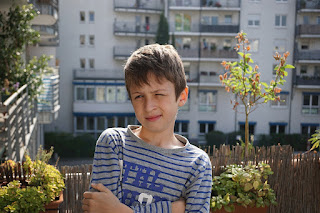 iso200, F6.3, 1/1000 seconds
I'm still quite surprised how good the sensor's dynamic range is. The second photo was taken with the HVL-F32M on the camera in fill flash mode. The flash works well in elemininating all shadows even at a very short exposure time (1/800 seconds). 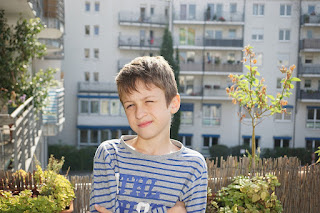 iso200, F6.3, 1/800 seconds
The third photo was taken in wireless mode. Máté was holding the Minolta flash and you can clearly see the direction of the light from this external flash: It takes two AA batteries and it works well with ready to use rechargeable ones (e.g. Eneloop). The flash head zooms automatically and unfortunately it cannot be modified manually. When a fiber optics adapter is attached to it and used for wide angle photography (fisheye lens) it narrow beam of light would be still better.
My first impressions are good, it seems to be a great affordable small flash for Sony’s new APS-C mirrorless cameras (I think it would fit well to the full frame models as well). Highly recommended.
Posted by Marcell at 11:23 AM