One of the most important components of a good fiberstrobe adapter after the fiber itself is the flexible hose. My very first DIY fiber optic project failed mainly because the arms I used were not flexible enough and adjustment just didn't work. This was my first version from 2007: 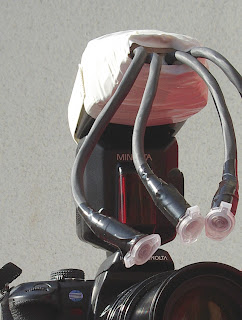 The concept worked somehow but adjustment of the arms was PITA, so I stopped using it. One picture below was taken with this prototype: 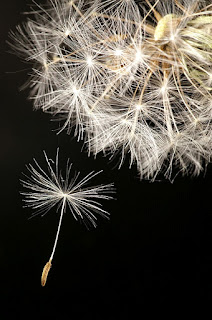 For a while I put the developement of this kind of adapter on ice and focused more on ringflash adapters. Later on I saw a very elegant solution for macro snoot on an underwater photography forum (www.wetpixel.com). This gave me an idea to re-make the first prototype and later on the fiberstrobe V3 was born: 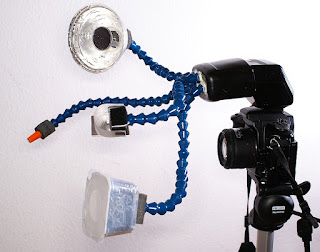 Same idea but this time it really worked well. Adjustment of the arms was easy and arms stayed in position allowing the precise adjustment of the light. So the key of the success was to apply a proper flexible hose (filled with optical fibers inside). I used loc-line products, which is originally designed to machine tool industry to vacuum or to stream coolant to a proper position. It's perfect since we want to stream or light from the flash also to a proper position.
Loc-line is a perfect choice for your DIY projects and I can recommend modularhose.com as a very good on-line vendor.
However, in Europe I haven't found a good distributor with easy on-line shopping options, so I looked for alternatives. I found the following companies producing and selling similar flexible pipes:

I haven't tried any of them yet but I ordered hoses from ARIANA for my next project. I will report on the quality soon. By the way, it will be a really cool project, so stay tuned.