The films of Evil Dead trilogy were my favorite horror movies when I was a child. Despite the low budget they were really scary and were full with crazy cinematic shots, strange angles of views and fancy tricks. I was really happy when I heard that Ash was back with his chainsaw. I also liked a lot the poster created for this new Ash vs Evil Dead TV series:
http://cdn3-www.comingsoon.net/assets/uploads/gallery/ash-vs-evil-dead/aved_teaser_1200x1800_final.jpg
You know that I’m a big fun of fisheye effects, so I decided to pay respect to the Evil Dead series and I took my own version of the poster. These are my pictures in portrait and landscape format: 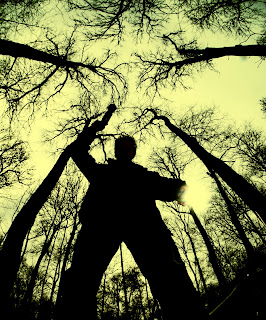 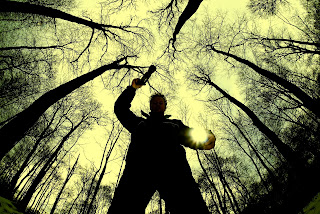 The show the branches of the trees in an almost circular format the camera was placed almost on the ground on a joby tripod. My new camera is a sony A6000 that has a cool function. It can be remotely controlled by a smartphone, so it was possible to have a full control on the picture even when the LCR/EVF was almost touching the ground. The only problem was that the battery depleted in my smartphone during the photo shooting, so the rest was just try and error approach. I had two sets of charged batteries for my camera and the flash, but I haven’t checked my phone. It’s still not yet part of the checking list. There is no extra light on the original poster, but I decided to hold not just a camera (my old nex-5) but also a flashgun. Ash is holding a chainsaw and boomstick in (on) his hands. I used self-timer (10 seconds) and radio triggering for my flash (simple yongnuo flash).
After resizing and cropping I’ve just increased the contrast and altered a bit the colors to get the final image.
Posted by Marcell at 6:36 AM