There are some photo subjects I like so much that I take photos almost every year again and again. In Leipzig there is a nice park nearby with small ponds and a wooden rotunda. In front of it there is a grass field with lots of crocuses in March and April.
This is my favourite from the first photo project devoted to the rotunda. It's typical light painting, so no fibers were used: 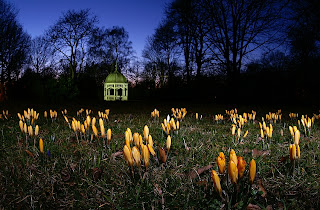 This was taken in 2008 with my first DSLR. A KonicaMinolta 7D. What a great camera. Now my brother takes wonderful bird photos with it. The camera was on a tripod and during the long exposure I manually used a flash to paint the flowers.
I repeated this photo later with sony a100 using the same lens (sigma 15mm fisheye) with the same technique: 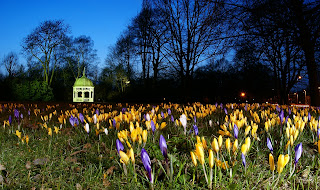 Not much different, maybe a bit better composition and more flowers.
Few days ago I took these below, but during daytime: 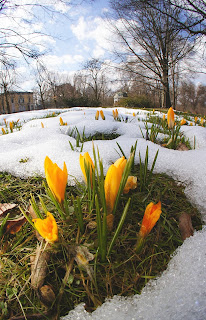 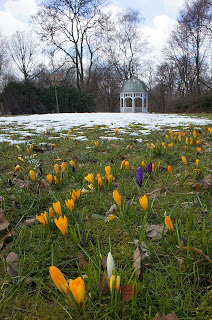 I used nex-5 and 16mm with (1st) or without (2nd) the fisheye adapter lens. I also used the flexible twin flash adapter that was helpful for the vertical composition. There is not too much obvious effect of the flash but it's there. I've checked the dates of these photos and it's very interesting (from top down): 2008.02.09, 2010.03.23, and 2013.04.01. We still have some snow left but maybe this weekend the spring will arrive. I hope.